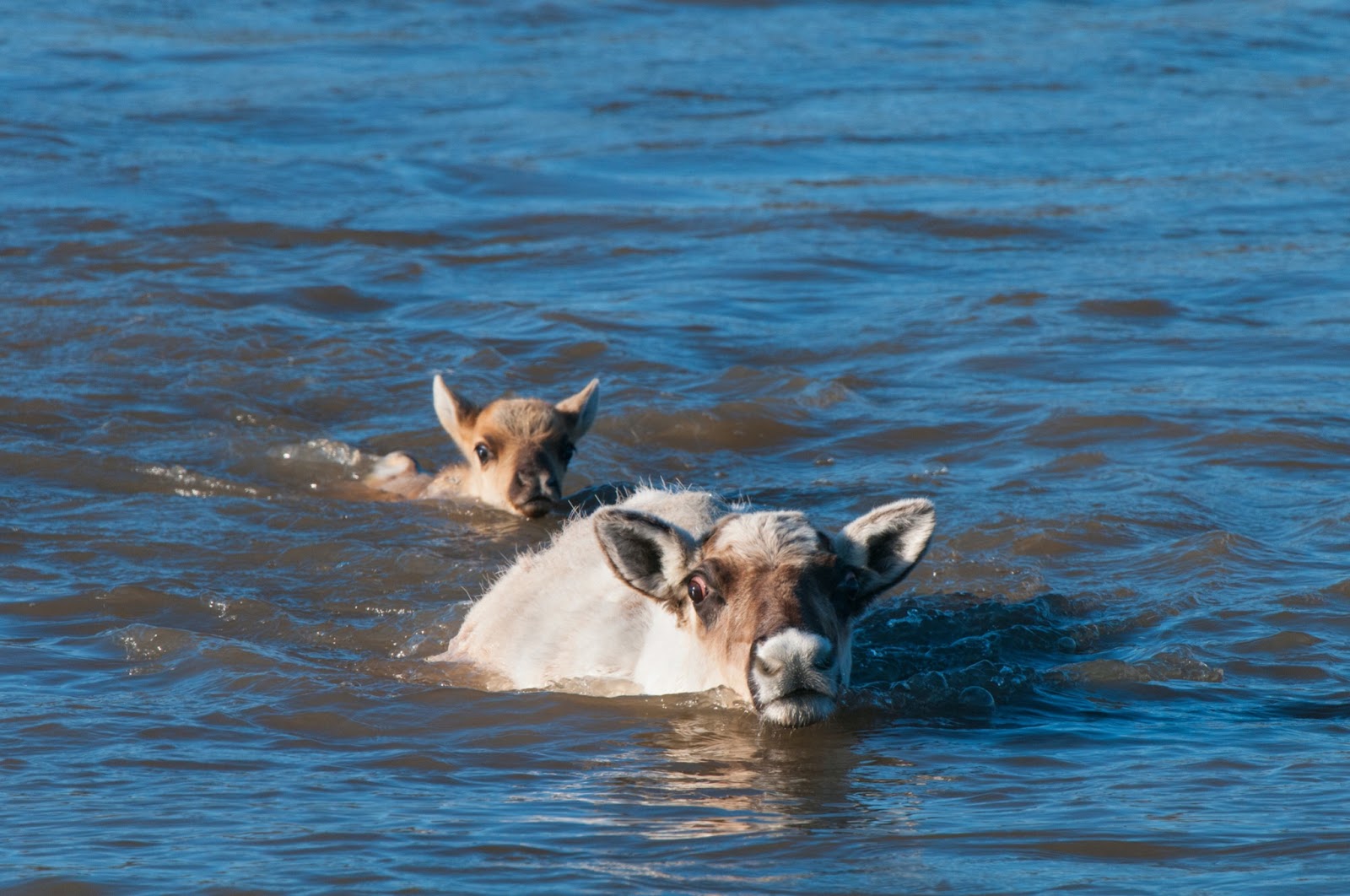 This blog is based on an excerpt from the book On Arctic Ground: Tracking Time through Alaska’s National Petroleum Reserve, in America’s Western Arctic, by author Debbie Miller. The Western Arctic, also known as the NPR-A, is directly west of the Arctic National Wildlife Refuge. It is a fragile Arctic region, home to Indigenous communities and bountiful wildlife including caribou, fish and migratory birds, and is a critical carbon sink to help fight climate change.

At 2:30 am I awaken to the sounds of deep bellows, urgent bleats, and thrashing in water. Just beyond the tent, a group of caribou cows with their week-old calves are crossing the Utukok River. These caribou belong to the Western Arctic Herd, Alaska’s largest at 188,000 members. We are camped near the calving grounds of the herd in the Utukok River Uplands Special Area.

The chorus of voices quickly awakens me. I crawl from my warm sleeping bag and slowly unzip the tent door to avoid startling any animals. Crouched low, I step outside into the blush of a never-setting sun that hangs thumb-high above the northern horizon. The low-angle summer light transforms the Utukok into a glimmering river of liquid gold.

Shielded by willow bushes, anthropologist Richard Nelson (Nels) and I quietly watch dozens of cows and calves wade and swim across the river. The calves look incredibly small, like puppies on barstool legs. One after the other, the lanky calves plunge into the water, closely trailing their mothers. As they swim, each mother calls repeatedly to her calf with a low grunt that sounds like the bass note of a tuba. The calves instantly respond with a nasal bleat. These paired voices create a rhythmical chant as they cross: Come; wait. Come; wait. Come; wait. Come; wait.

On the edge of the sandbar, one small calf watches others successfully cross the river. When its mother wades into the water, the calf follows tentatively, taking a few steps into shallow water, then doing an about-face, heading back to shore. The mother swims partway across the channel, then wheels around, returning to her calf.

Side by side, mother and calf stand near the water’s edge. The mother seems patient. They linger on the sandbar until most of the herd has crossed. Only then does the mother try a second time, calling to the calf as she enters the water. Again the calf follows.

A caribou mother breaks the current of the river to allow its calf to follow in the eddy she creates. Calfs are capable of following their mothers on their migration within hours after their birth. Utukok River, Western Arctic Alaska

Charcoal muzzle above the water, small ears perked, the calf paddles hard to keep up with its mother. Their voices are constant while they swim: Come; wait. Come; wait. Come; wait. Caribou are known to be strong swimmers with broad, paddle-like hooves and hollow hairs that help them float. Within a few minutes, the calf reaches the other side and scrambles up the riverbank at its mother’s heels.

Both calves struggle to climb the cut bank, but they careen back toward the river. It’s just too steep for these calves that might weigh around 12 to 15 pounds. Each mother returns to the river, hoofing ruts into the muddy cut bank, coaxing the calves to try again. By example, these 200-pound, strong-legged cows show the way, climbing up and down the cut bank several times. The calves try to follow but stumble back to the river’s edge. It’s agonizing to watch; I contemplate paddling across in the canoe to help them.

Finally, after many attempts, the two calves scramble up the cut bank and join their mothers. They suckle for several minutes, then trot off to join the rest of the herd. The caribou voices grow faint, and soon we hear only the cackling of willow ptarmigan.

Back in the tent, I drift off to sleep thinking of the hundreds of thousands of caribou calves that will cross their first rivers during the month of June. It’s a remarkable feat, when you compare a calf’s lanky stature to an adult cow. Some calves are swept away by rivers and perish without their mothers. In fact, only about half of the calves survive their first year due to river crossings, extreme weather, poor nutrition, or predation.

These caribou travel thousands of miles each year, crossing many rivers. Their vast range, the size of Montana, includes forty Native communities that have relied on the herd for food, shelter, clothing, and other uses for thousands of years. Yet the herd’s calving grounds are smack-dab in the middle of the National Petroleum Reserve–Alaska. 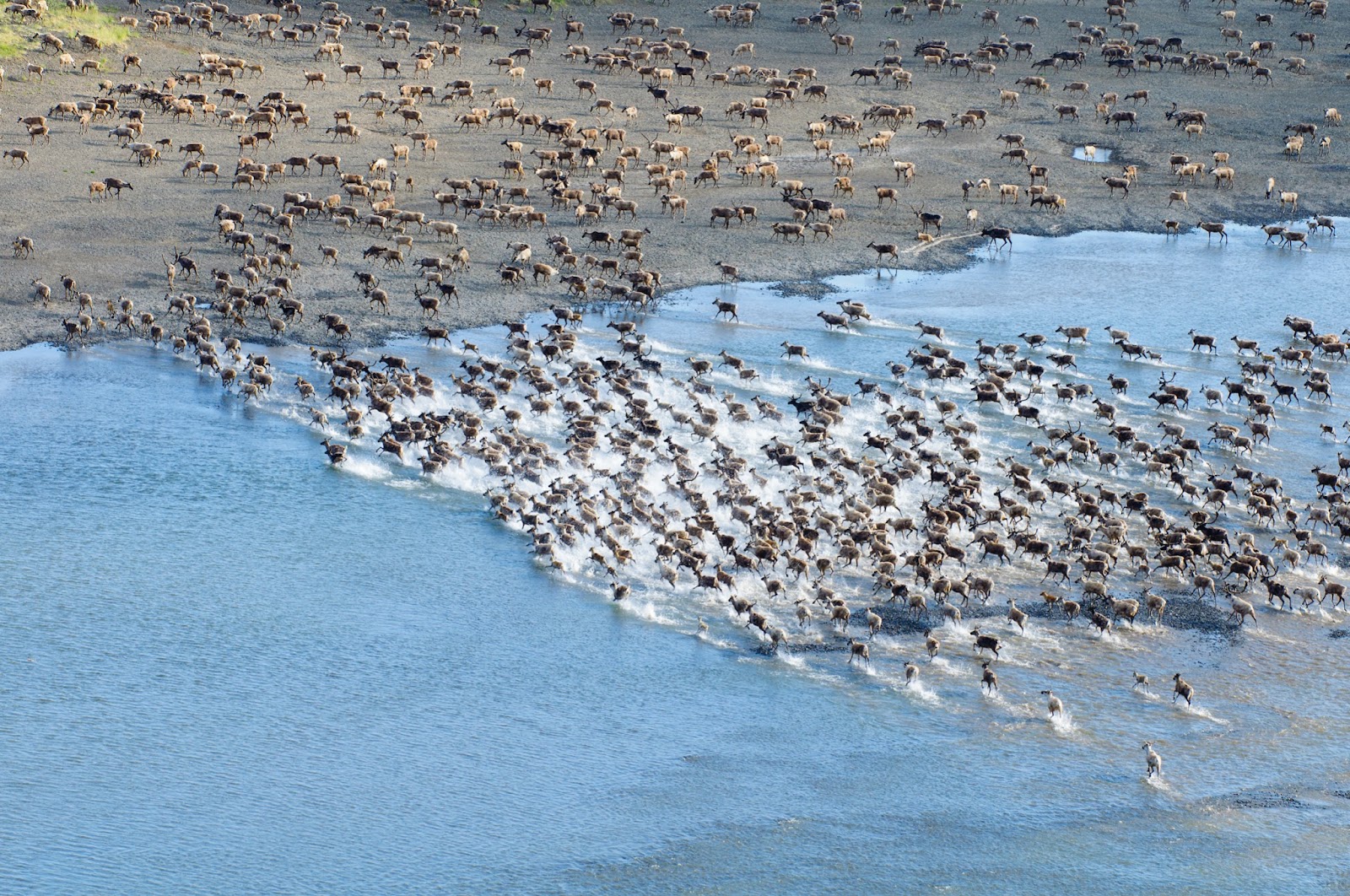 I ponder what can be done to protect this birthplace of America’s largest caribou herd. I hear them calling again…this time, one cow and her calf. From the tent, it sounds as if these two stragglers are separated from one another. Nels, who contributed an audio chapter and essay for this book, starts recording the voices from inside the tent. I quietly slide out and sit by the door. The bleating calf is stuck at the base of another steep cut bank directly across the river from our tent. The mother is nowhere to be seen.

The calf paces the narrow shore, then launches into the river, swimming toward us. This newborn’s tackling the river alone seems almost miraculous, given its size. It reaches the shore, shakes the water from its fur, then walks directly toward the tent. From 5 feet away, its dark eyes look curious yet bewildered. Heartstrings tugging, I softly say, “I hope you find your mom.” It’s hard to believe that this lost knee-high creature, just several days old, has just swum across a river and stands next to me.

Then off it goes, back toward the river, following the edge of the gravel bar, where it soon prances beyond a patch of willows. Everywhere along the Utukok, the bars are crisscrossed with tracks of bears, wolves, foxes, and wolverines. This lone calf would make an easy meal. 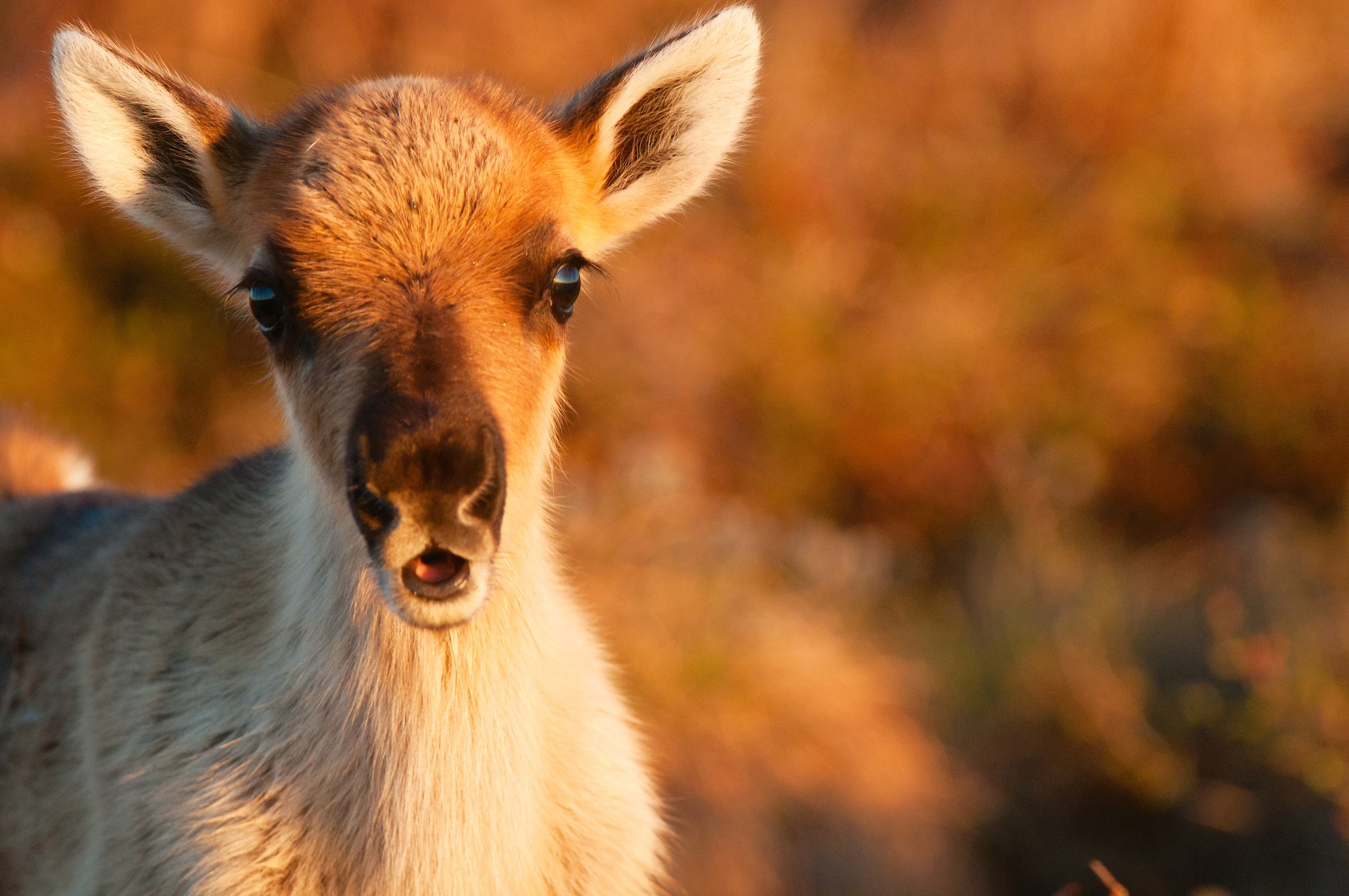 A caribou calf is calling its mother. Tens of thousands of calves migrate with the herd immediately after they are born. Utukok Uplands, Western Arctic, Alaska

That thought disappears when I hear the voice of the mother calling again, the calf answering in the distance: Come; where? Come; where? Come; where? Through voice recognition and scent, the cow-calf bond is incredibly strong. After long minutes pass, the cool morning air fills with the comical cackling and mumbling of ptarmigan and the songs of redpolls, sparrows, and one melodious robin.

The caribou voices have grown silent. Perhaps one determined calf has found its mother.

The Willow Project: A Threat to the Western Arctic’s Wildlife

A dangerous and damaging new oil project called Willow, located in Alaska’s Western Arctic near Teshekpuk lake and the Iñupiat community of Nuiqsut, is currently being considered by the Biden Administration.

This project would be a disaster for this fragile Arctic region, home to Indigenous communities and bountiful wildlife including caribou, fish and migratory birds. And it's a disaster for our climate—with the potential to add 287 million metric tons of CO2 to the atmosphere over the next 30 years. That’s equivalent to the annual emissions from 76 coal plants - one-third of all remaining U.S. coal plants.

The Biden administration closed public comments on its supplemental environmental analysis in late August. With the administration poised to issue a final decision on Willow later this year, President Biden has an opportunity to secure a climate victory in America’s Arctic. Tell President Biden: Do not approve ConocoPhillips’ massive Willow oil project at the expense of local communities and the climate.  Learn more about the Western Arctic and then stay tuned at @ProTheArctic on Instagram for important updates and actions you can take to protect America’s Arctic.

All photos by Florian Schulz. 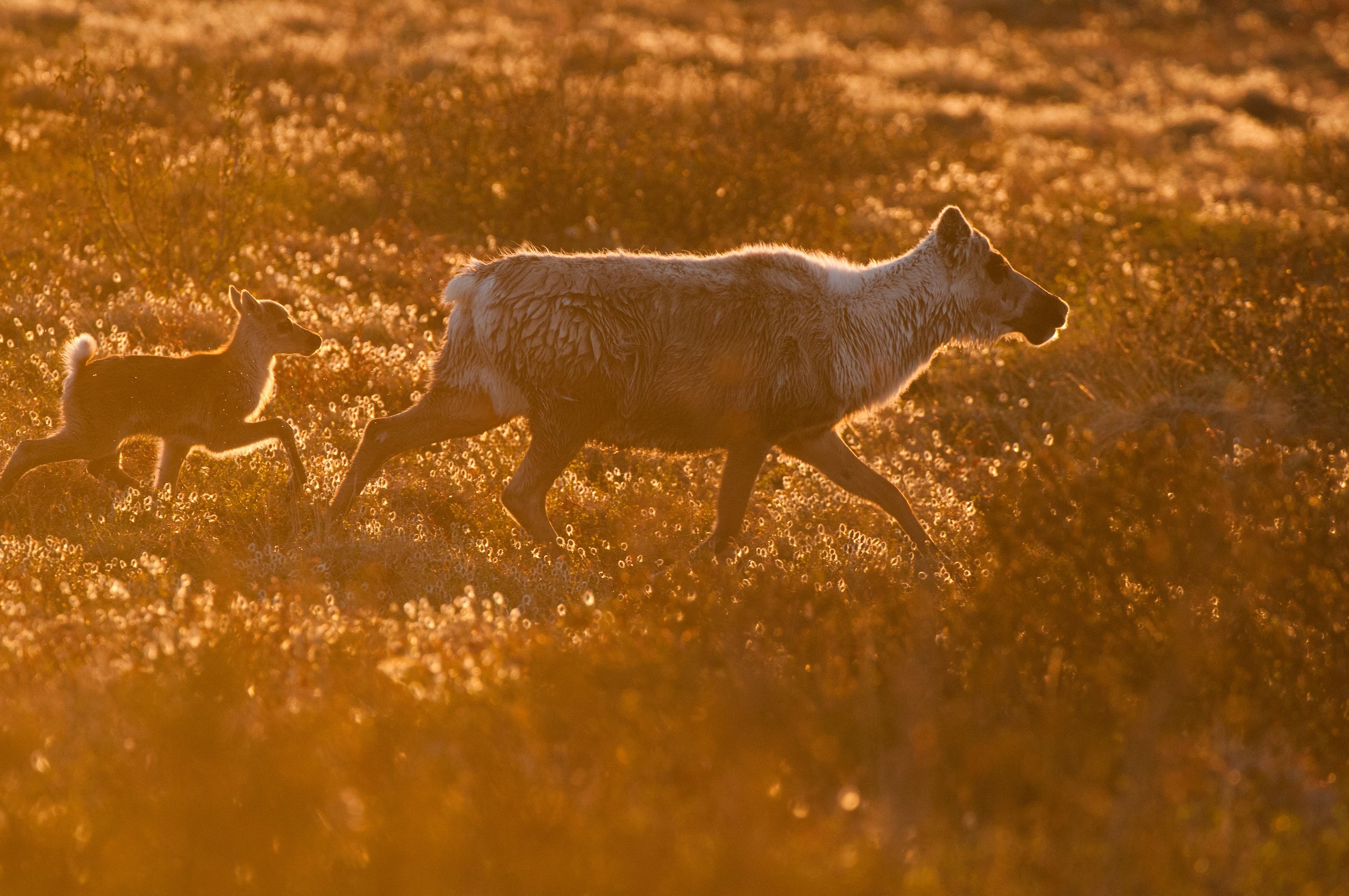