Listen to the Scientists 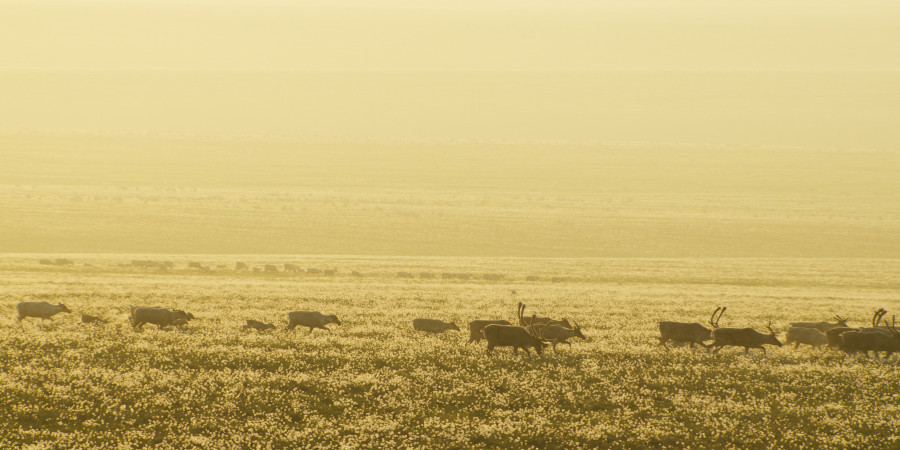 George B. Schaller’s work with Panthera and the Wildlife Conservation Society has contributed to establishing parks and preserves throughout the world. With Olaus and Mardy Murie he was a member of the 1956 expedition in northeastern Alaska that resulted in establishing the Arctic National Wildlife Refuge. These excerpts are from his remembrances, captured in Arctic National Wildlife Refuge: Seasons of Life and Land by Subhankar Banerjee.

As we settle into camp we immediately begin to absorb the wild beauty around us. We have come to study not only the natural history but also to gather impressions of the “precious intangible values,” as Olaus Murie phrased it, with the hope that this knowledge will lead to protection of the area. 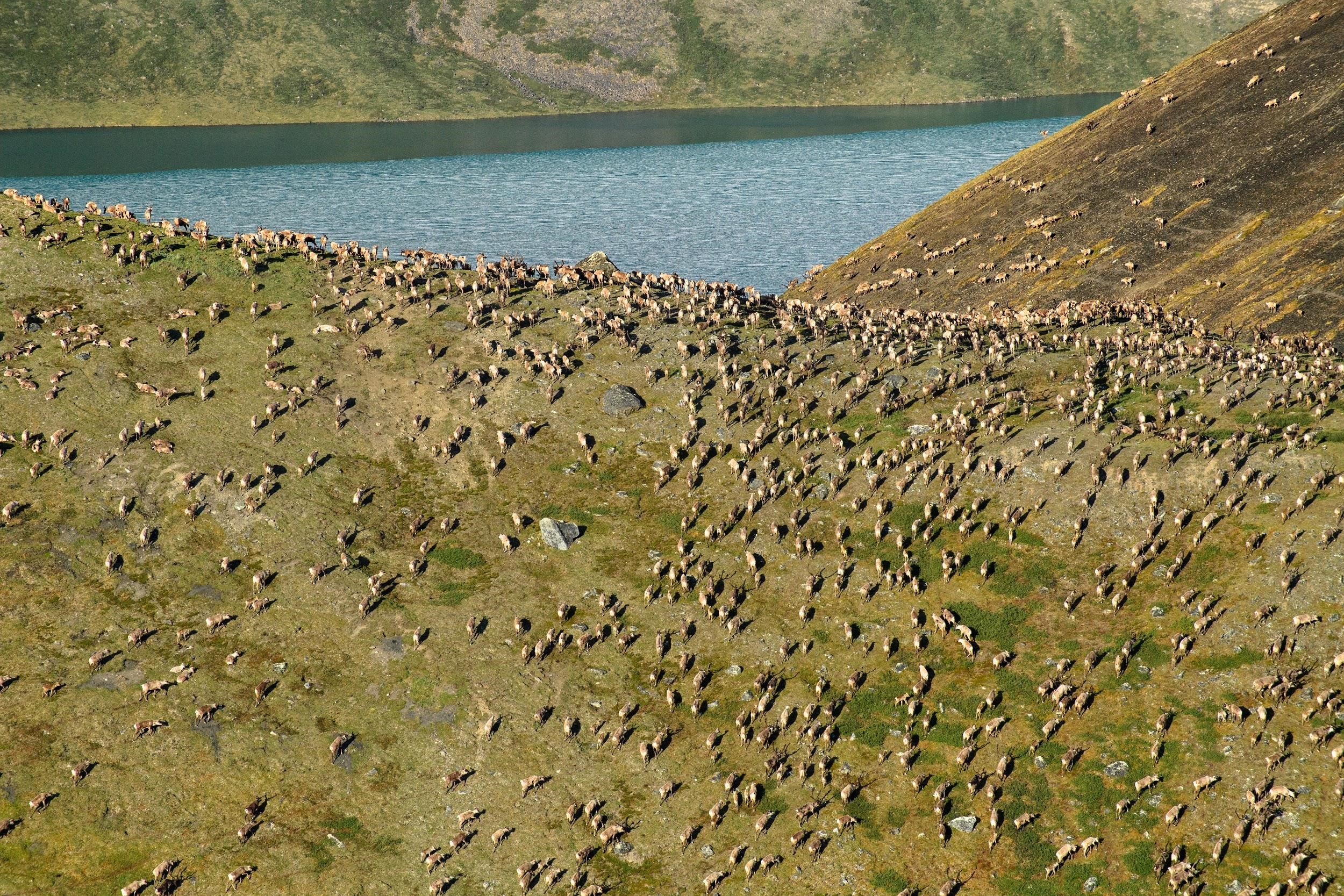 In this land of the midnight sun the jubilant singing of juncos, myrtle warblers, tree sparrows, and gray-cheeked thrushes can be heard twenty-four hours a day. From our tents we see occasional bands of caribou crossing the lake ice in single file and hear the sound of their clicking hooves. They are part of what is known as the Porcupine herd, and they, too, are heading to the tundra of the coastal plain, where they will gather by the tens of thousands to calve. One day two massive grizzlies the color of winter grass trace the shoreline eating tender grass sedges. And once a gray wolf trots past our tents; we name the lake by our camp Lobo Lake in his honor. 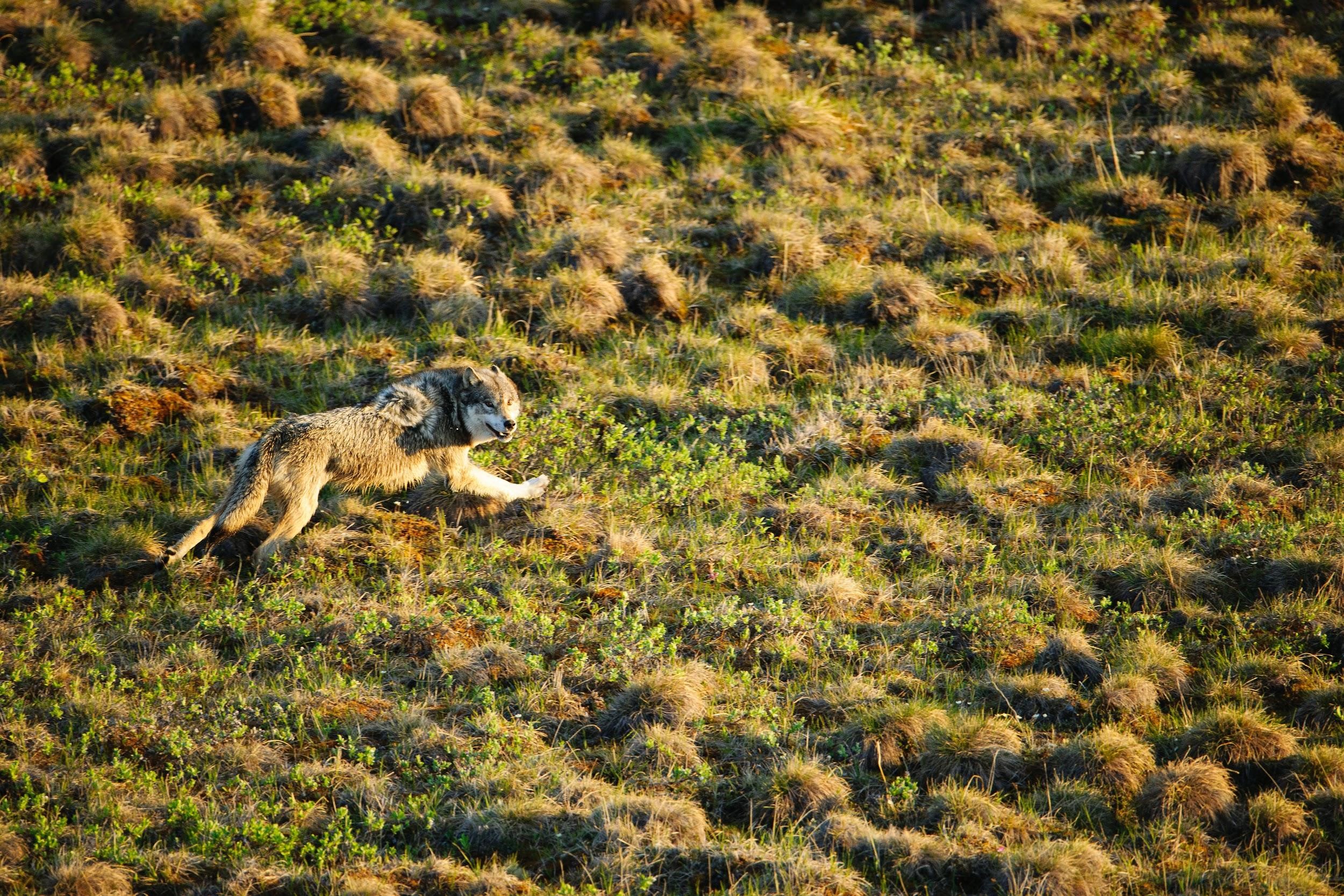 Leaving the valley, I climb among the stark, gray limestone cliffs bordering it up to the alpine tundra, where I note the first gentian and delphinium of the season and add wheatear, horned lark, and Lapland longspur to our bird list. . . .

Standing among sharp-edged peaks, at the convergence of mountain and sky, I am alone at a place without roads or people, not even trails except those trodden by wild sheep and caribou; there is nothing to violate the peace, with mountains still unaffected by humankind. Here one can recapture the rhythm of life and the feeling of belonging to the natural world.

Karsten Heuer is a wildlife biologist and author who has spent much of his time following endangered North American wildlife on foot and skis. His second book, Being Caribou, won the 2006 US National Outdoor Book Award.

Familiar sounds pull me from my slumber: snorts, coughs, sneezes, and hoof falls punctuated by the clip-and-pull of grass. But there’s something different—something new and urgent. I shuck off the damp sleeping bag, fumble for my glasses, and sidle up to my wife sitting at the tent door.

It is June 2, our second month of skiing and hiking with the Porcupine caribou herd, and within moments I see the groaning cow a hundred feet in front of us, splayed like so many others here on the coastal plain. She is lying sideways in a bed of tussocks, gripped with contractions that ripple from her bony shoulders to her bonier hips. 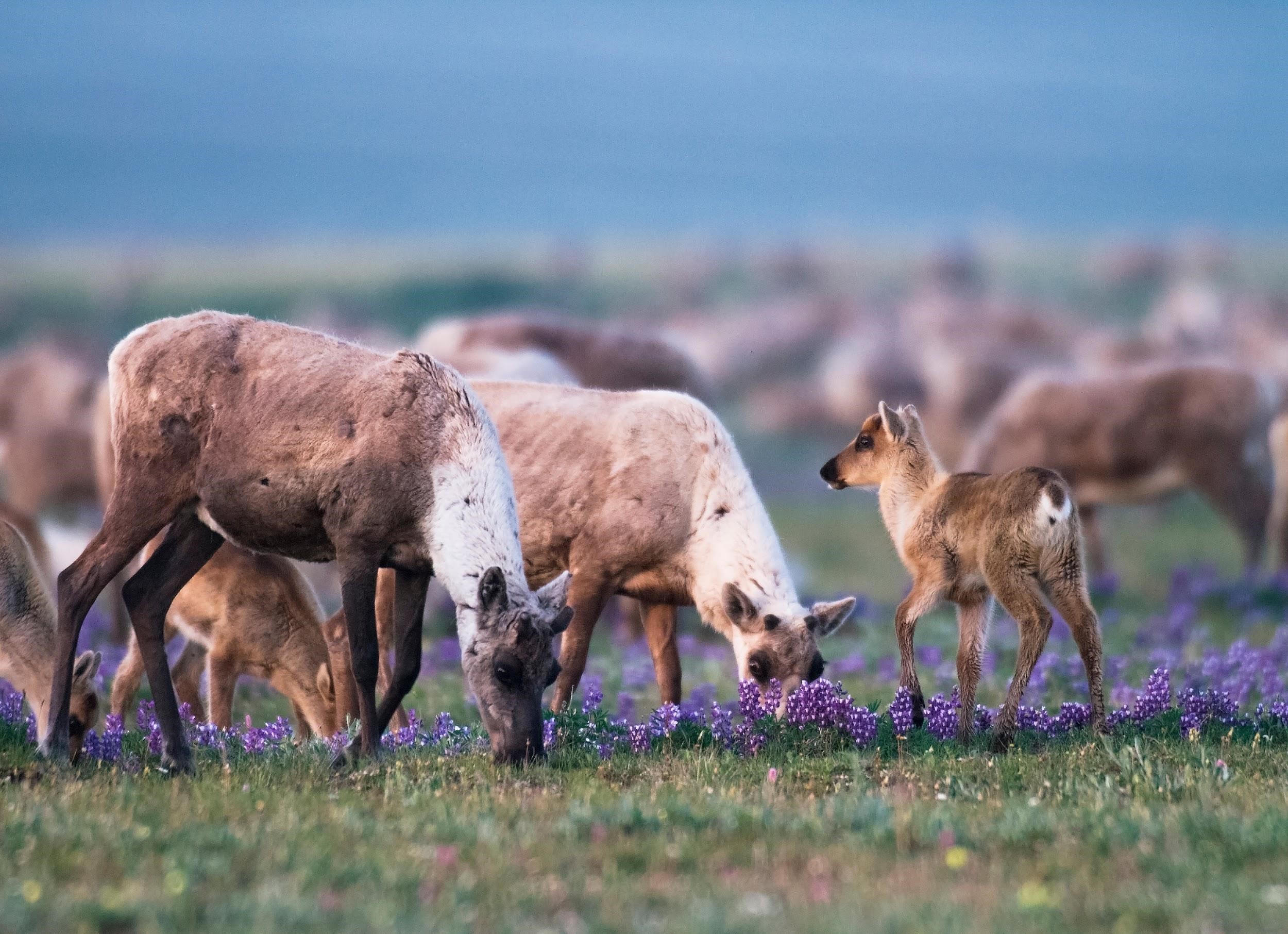 It’s not the first birth of the year—a few one- and two-day-old calves already cavort in the curtain of thousands of caribou milling in the background—but because of fog banks rolling off the nearby Arctic Ocean, it’s the first we’ve seen since the migration brought us here two days ago. A bundle of wet fur emerges from the cow’s hind end, followed by a miniature muzzle suckling at the air. Nuzzled by its proud mother, the calf struggles up, falls down, and struggles up again, a bundle of misfiring muscles and short-circuiting nerves trying to connect under its paper-thin skin.

Leanne and I fiddle with camera gear and attend to our bladders within the confines of our four-foot-by-six-foot tent. It’d be better to do our business outside, but contrary to what the oil companies and pro-development politicians proclaim, these expectant and new mothers are skittish, bolting at the sight of anything noncaribou, even if it’s half a mile away. So we do our business in our cups and discreetly empty them out the back door, hunkered down at the epicenter of life while oil companies make their plans tens of thousands of miles away. 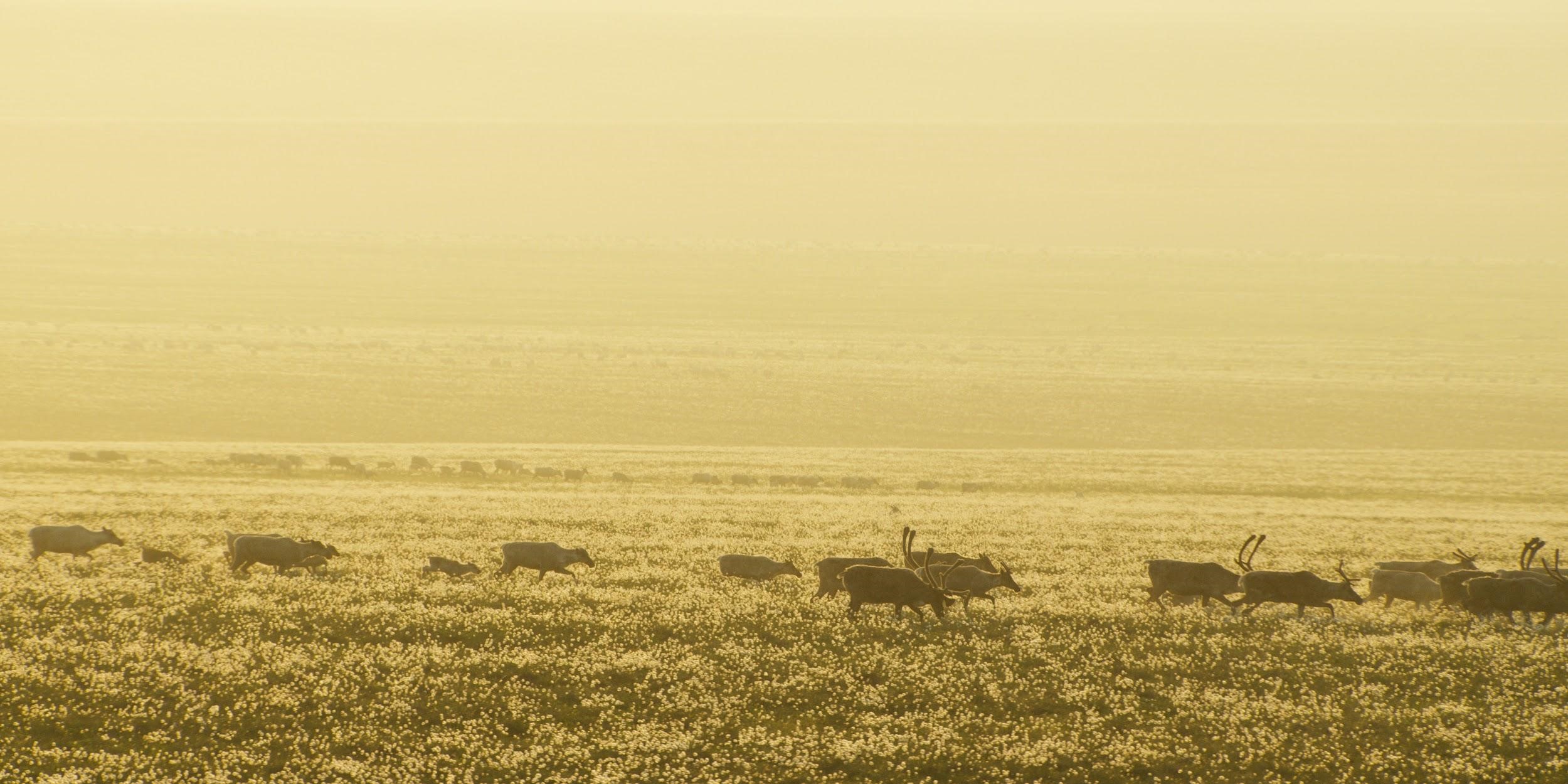 Where Birds Are Born

When I was in the Arctic National Wildlife Refuge in July several years ago with Subhankar Banerjee and Robert Thompson, they would often point to a particular species and ask, “Where does that bird come from?” Each time the question caught me off guard, and I thought to myself, “What do they mean? We’re looking at a nest; that bird comes from right here.” From my southern perspective, I went to the Arctic to see these birds on their breeding grounds—to see where they came from. But from an Arctic perspective, these birds are just brief visitors; some are in Alaska for only a few weeks. They may be born in the Arctic Refuge, but most of them don’t really have a permanent home; they’re always moving, and, in that sense, they don’t come from anywhere. 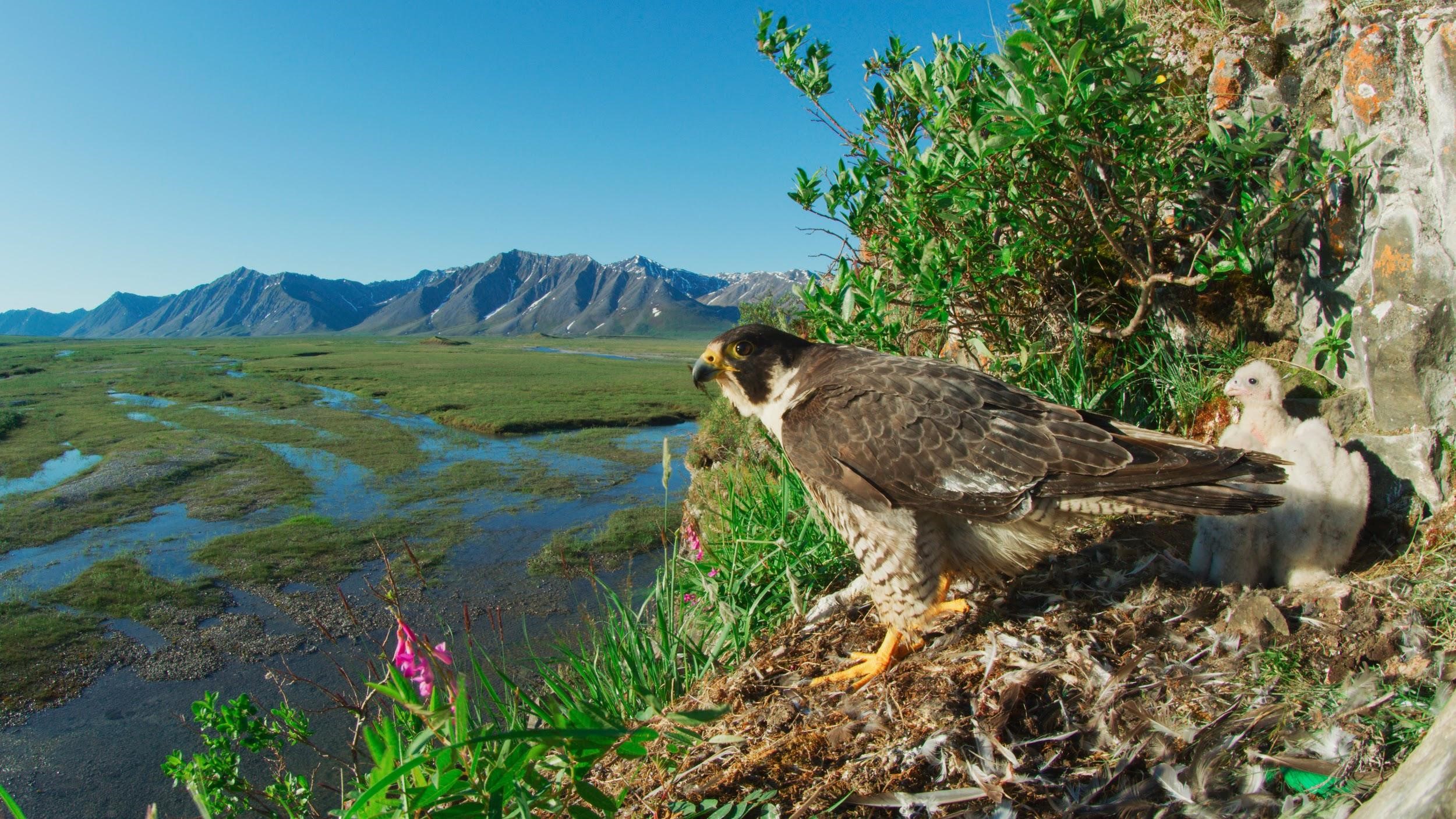 There is a kind of music in the patterns of bird migrations, a delicate rhythm that plays over the slow cycles of seasons, the orbits of planets, the raising of mountains. It is the rhythm of the Earth made plainly visible.

In many places, our modern lifestyle—with its time clocks and computers and automobiles and insulated, air-conditioned buildings and processed food—has isolated us from this rhythm. The ancient rhythms are there; they are a part of all of us. We understand them and follow them subconsciously, but too much of our lives now is separate from them, and we hear them only when we know what to listen for. Sanctuaries like the Arctic National Wildlife Refuge are among the few places on Earth where we can hear the natural rhythms clearly, and where some humans still live in harmony with those rhythms. 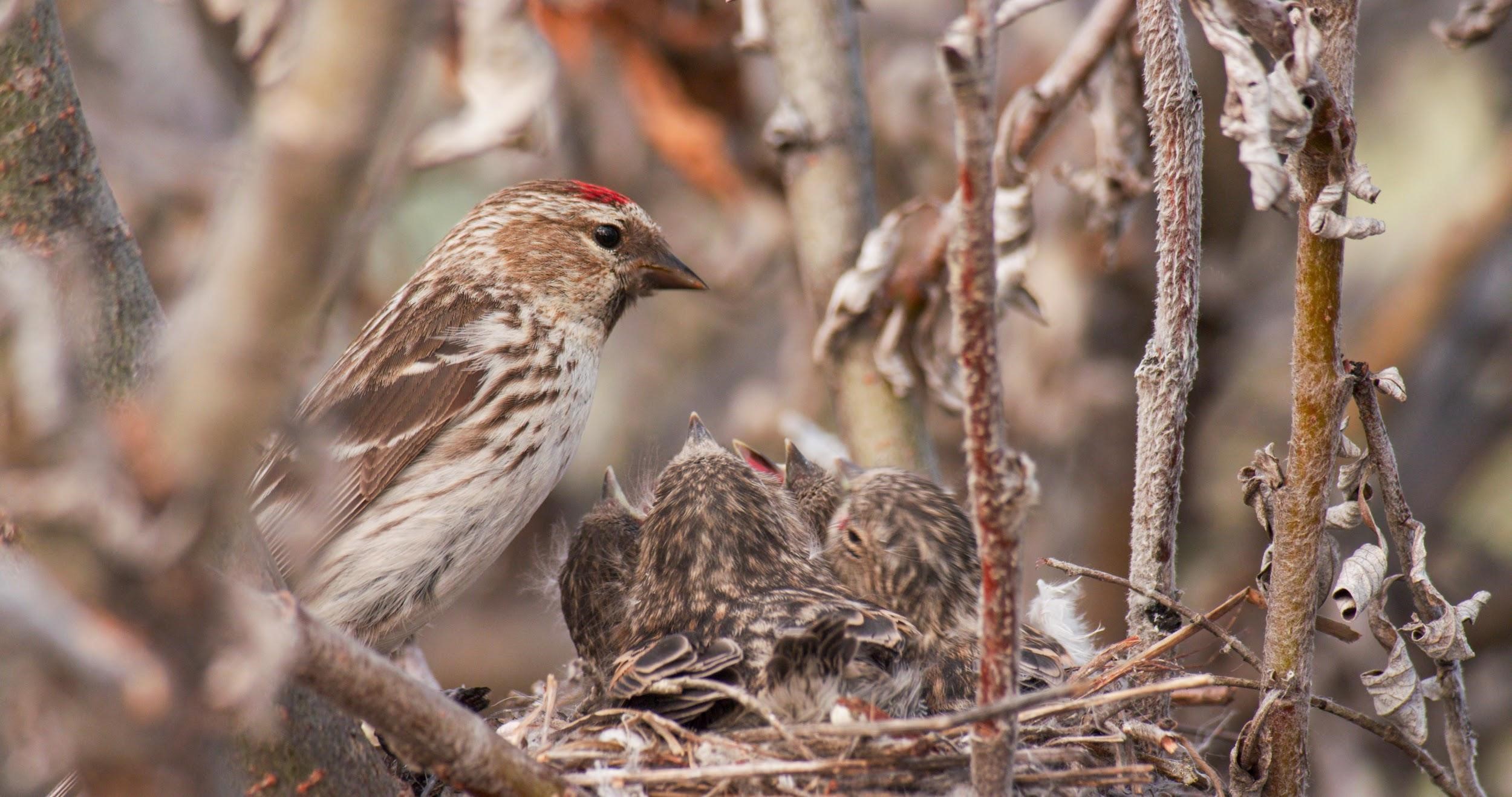 Nobody knows what drove the Labrador Duck to extinction in the 1800s, and nobody can predict what will happen with increased human activity in the Arctic. Oil exploration could be enough to tip birds in jeopardy, such as the Steller’s Eider and the Buff-breasted Sandpiper, into extinction. Whatever the results of development may be, it is certain that migrating birds will make those effects, small or large, visible all around the world.