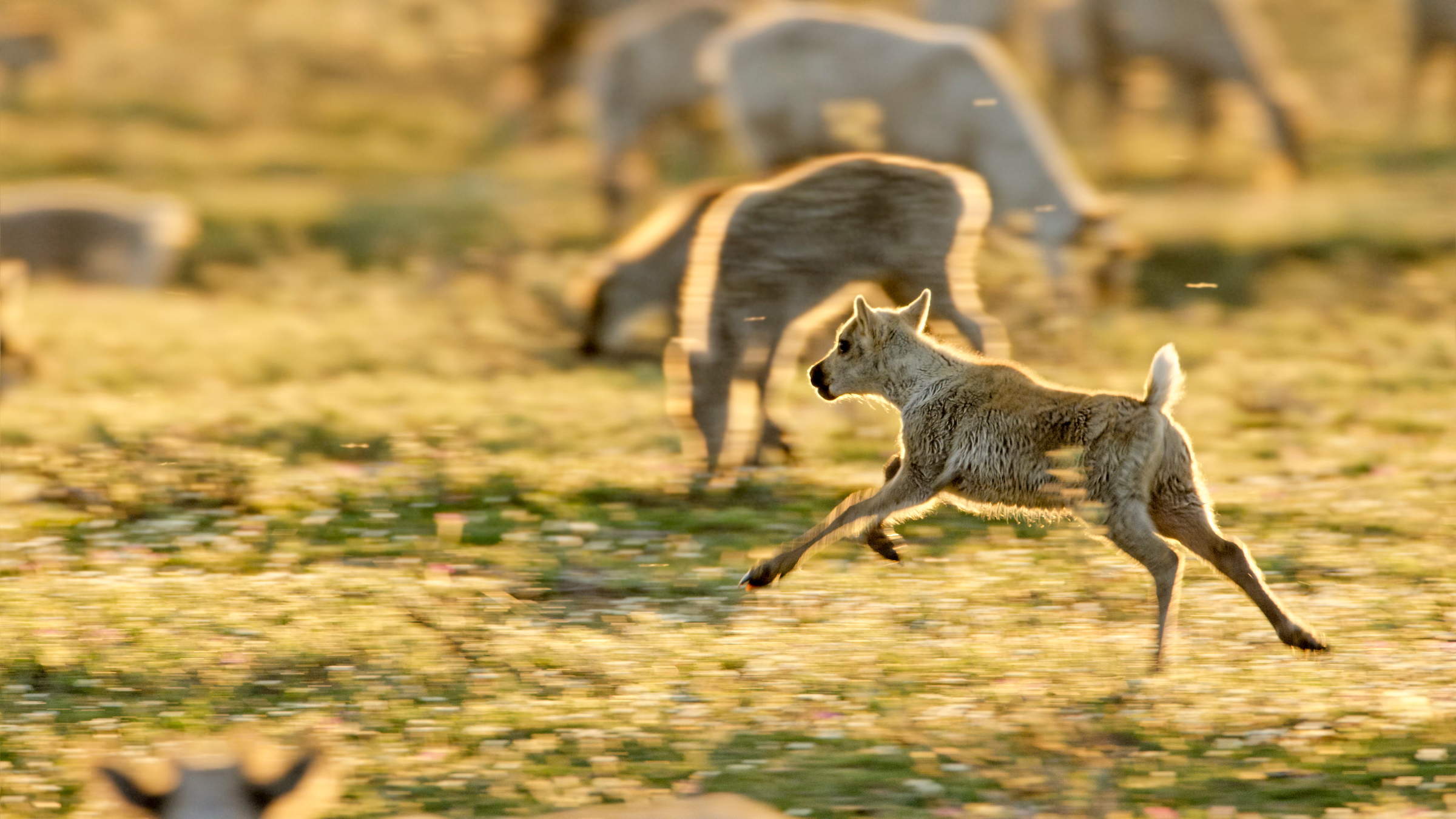 By Florian Schulz and Emil Herrera Schulz, excerpted from their book Journey to the Arctic

Florian: Strange coughing and grunting noises enter my dreams, intermingling with sounds of the roaring of the river nearby. Emil and I are fast asleep in our tent, exhausted from our long journey to one of the most remote places in North America, the arctic coastal plains. My anxiety grows as I wonder if a wave of meltwater is rushing down to whisk us away. I wake up with a start and relief: It is the caribou!

The Arctic is home to the largest mammal migration left in North America—a reminder of the vast buffalo herds that migrated across the continent until they were hunted almost to extinction in the late 1800s. Millions of caribou arrive on the arctic plains in summer in many large herds to have their young and to feed on the fresh green shoots of the tundra. After numerous expeditions in search of these wild creatures, we were at least witnessing the Western Arctic herd as it undertakes its astonishing 2,000-mile annual migration between northern Canada and the Alaskan coastal plains. 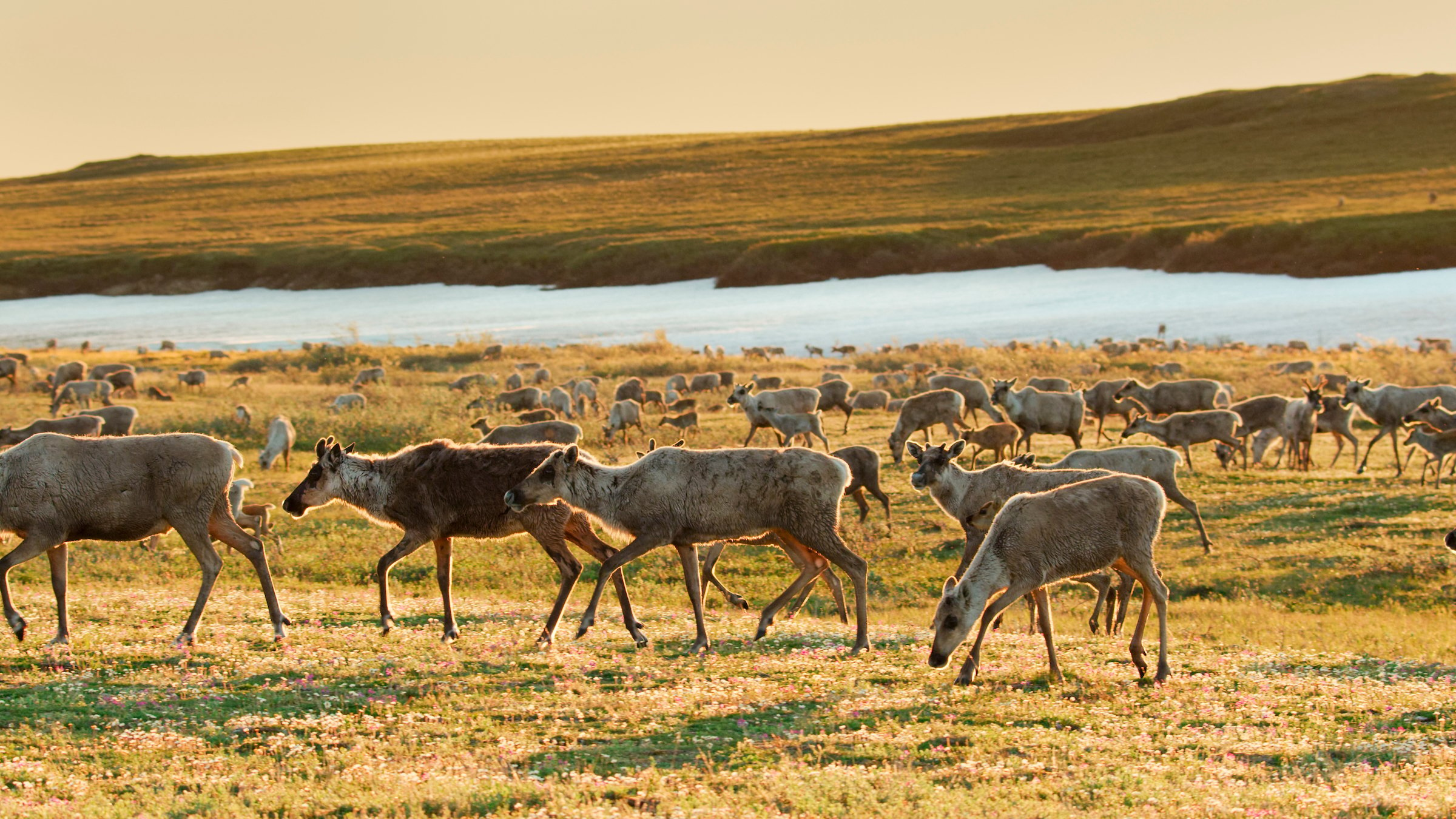 Emil and I scramble to collect camera gear. The sound of splashing water and grunting fill the air as a large group of caribou enters the river across from our amp. Slogging through the uneven terrain of the muskeg, we quickly make our way onto a nearby ridge. We arrive exhausted and drenched in sweat.

It is hard to express the joy that has overcome me. The landscape below is alive with thousands of caribou. I’ve waited for this moment for years. For me the caribou are a symbol of true wilderness. In the vastness of the arctic, they pursue their ancient rhythm of migration through the course of the seasons, just as they have for thousands of years.

Emil: As Florian walks down closer to the river, I remain on the ridge with video camera and tripod to film from above. Florian quickly disappears among the golden grasses near where the caribou scamper out of the river. Through the viewfinder, I watch him photograph as ever more caribou arrive at the river and surround him. The sun lingers just above the horizon across the river towards the northeast, highlighting the caribou and the landscape with a fine rim of golf. In a depression at the edge of the river, Florian is right in the missile of the caribou. Hundreds are climbing up the riverbank and pass within feet of his hiding spot. The air is filled with the caribou calls and coughs. In the chaos of the river crossing, mothers and calves get separated. Eyes bloodshot and filled with panic, mothers and calves look around for each other. 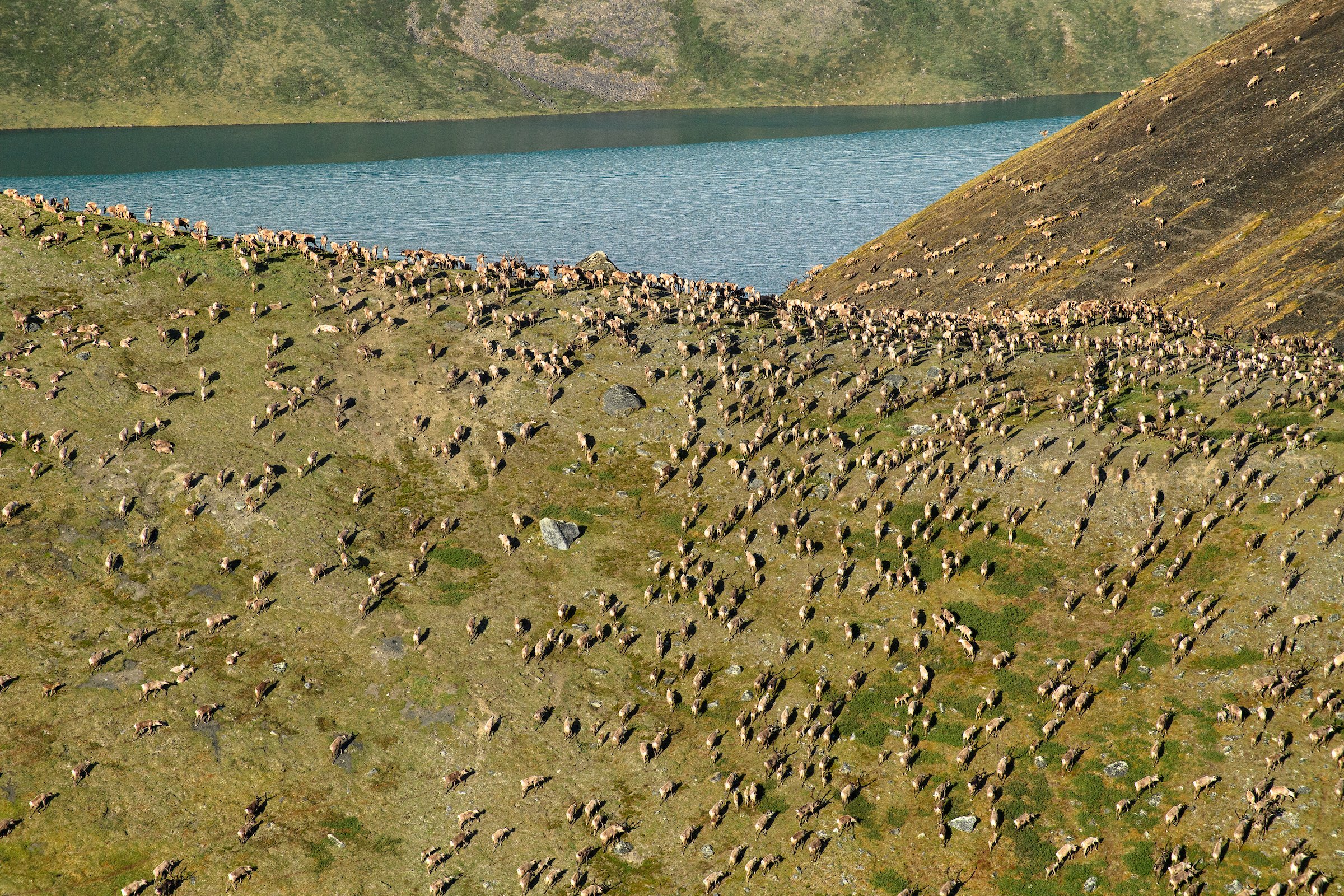 It is summer, and at this time of year and northern latitude, the sun never sets. We have been up for almost thirty hours. We return to our camp, hungry. While Florian puts some water on to boil in preparation for our meal, I grab my sound recording gear and head to the river. Beneath the thin layer of a camouflage blanket, I hunker down and wait. Headphones over my ears, I hear my surroundings in stereo. Suddenly branches are cracking, hooves are trembling, and caribou are calling all around me. As the sounds become louder, I wonder if the animals might run me over.

Florian: It has been a while and I wonder where Emil is. I see her running toward me from the river, and I can tell something is wrong. Out of breath, she shouts, “Florian, I found a lost caribou calf—we need to rescue it!” I look at her with compassion, not sure what we can do. But she insists on leading me to the spot, and quickly explains that the mother is still nearby, running back and forth, calling for her calf. Willow branches whip against my face as we hurry through the brush. 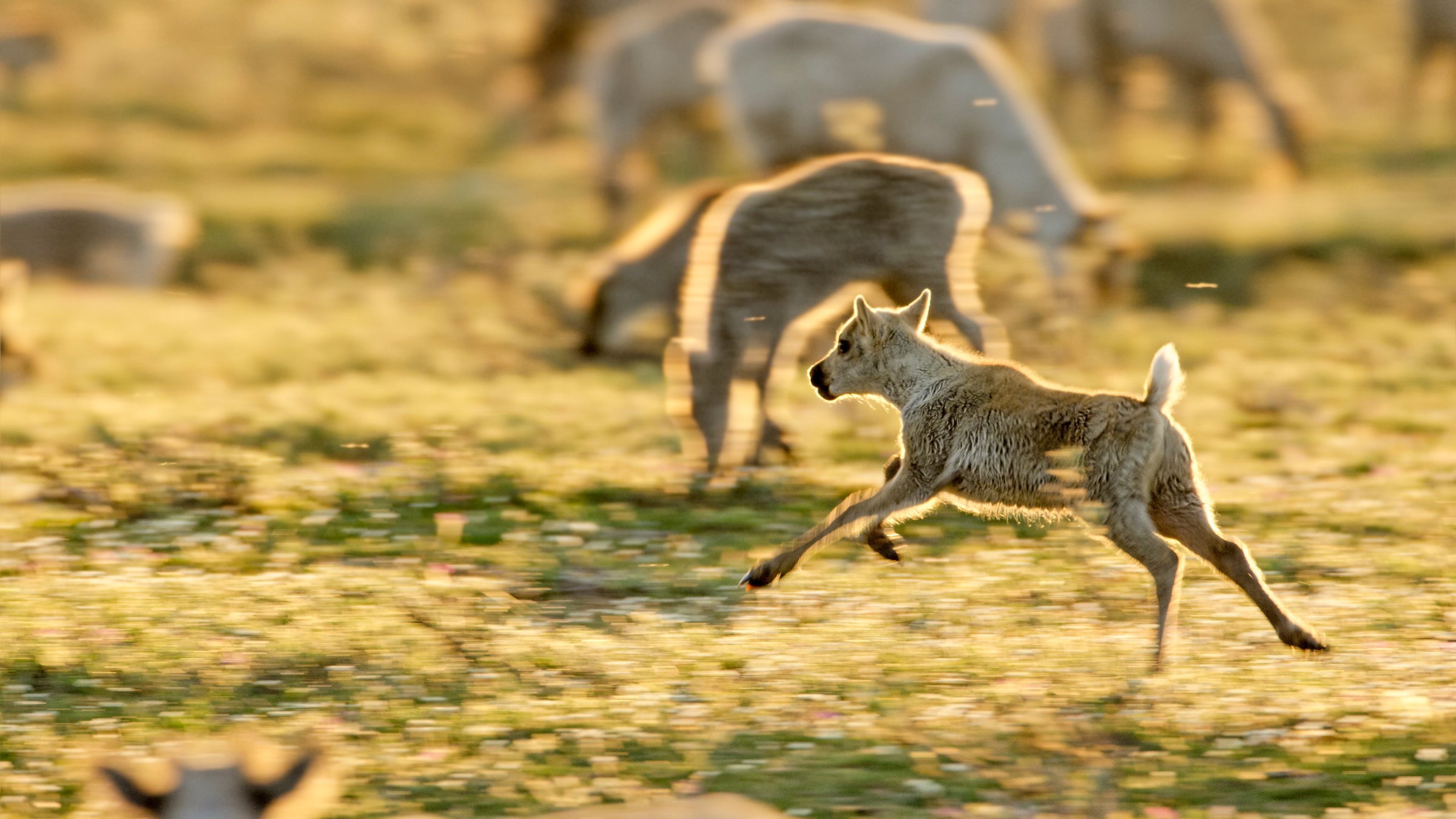 When we reach the calf, it doesn’t move as I appear above the trench where it has fallen. It is wet, cold, and shivering—and by this time, without energy to even call out for its mother. As I look over the frantic mother caribou beyond the willows, I understand what Emil is thinking. I pull off my jacket, kneel down and pick up the little caribou, and pass it into Emil’s arms.

Emil: With its last energy, the little calf kicks as Florian passes it over to me. I gently hug the calf and bring its legs together to make it feel snug and warm. Its fast-beating heart pumping against my chest begins to slow. I walk over to where the mother caribou is sunning in circles, calling her baby. As I place the calf on the ground, I feel its little snout pushing between my jacket and ribs, searching for milk. My heart melts at this expression of trust from this little calf. I get up and walk away, but it follows right behind me! The little guy is confused, and I look over to Florian. 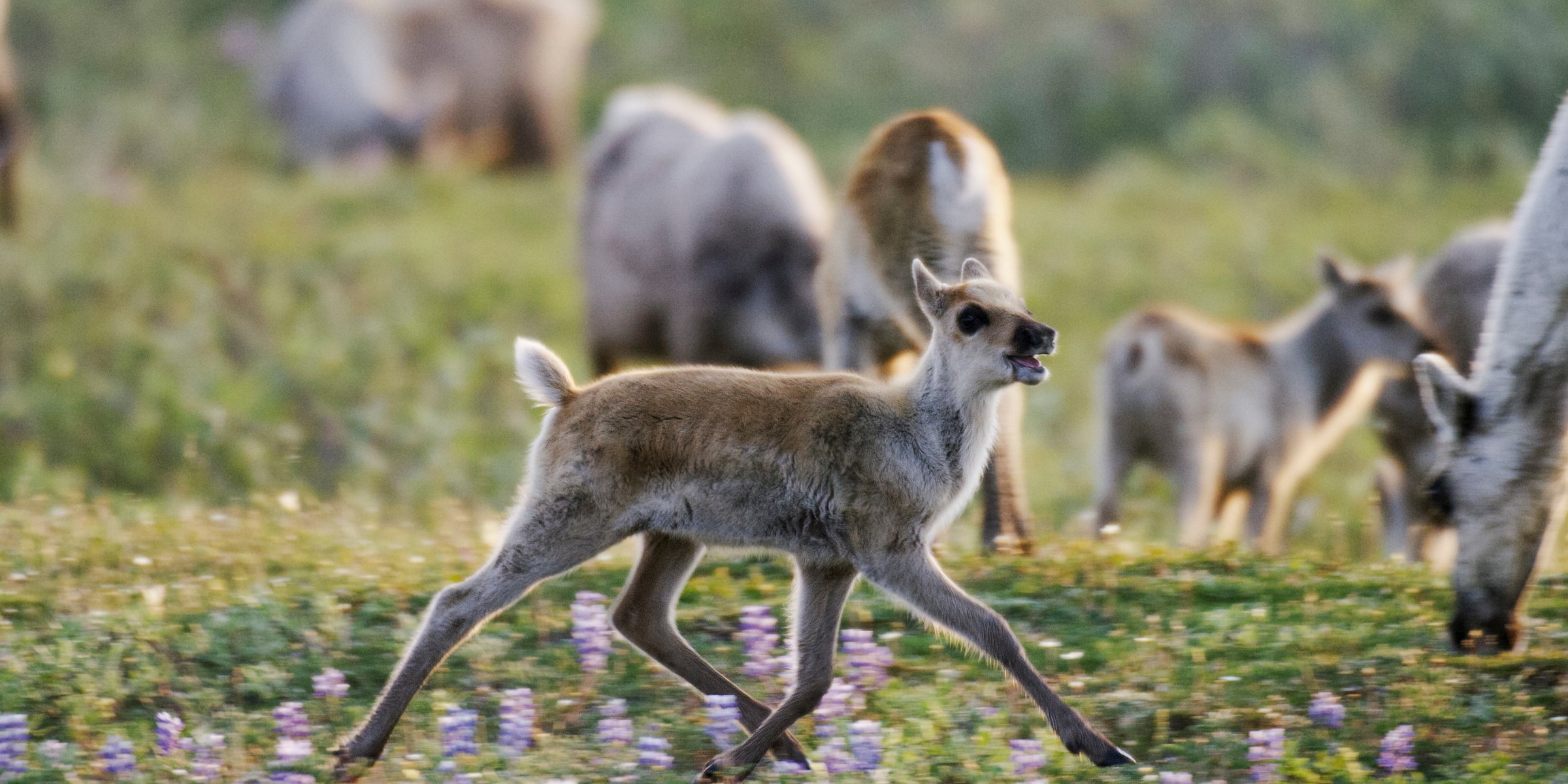 Then suddenly, the call of the mother reaches the calf, and it turns toward her. On its long legs, the calf runs over to the cow, and both touch notes, recognizing their smells. With relief and joy, we watch cow and calf hurry together over the hill, to catch up with the rest of the migration caribou as they continue their long journey.

About the blog authors

Florian Schulz is a German-born, award-winning wildlife photographer and the director of The Arctic: Our Last Great Wilderness. His passion for wilderness has taken him to remote locations around the globe, where he captures inspiring images of wildlife. He has received numerous international awards for his photography including Environmental Photographer of the Year. He has published two books with Braided River: Yellowstone to Yukon: Freedom to Roam, and To The Arctic.

Emil Herrera-Schulz has explored the western states of North America and the circumpolar Arctic with her husband, helping to photographically document the richness of these unique ecosystems. A native of Mexico, her curiosity about the natural world and passion to document untouched wilderness lead her to remote locations where she captures video footage and sound recordings.